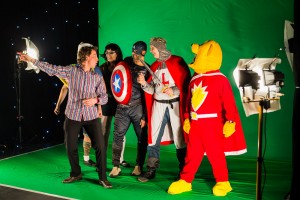 If you think of green screen technology as something that’s just for Michael Bay and George Lucas, it’s time to take another look at its incredible potential.

Tim Peake is getting a lot of well-deserved column inches right now. But everyone knows that the first Brits in space were the Leeds hip-hop band Tha Big WOW, back in 2012.

When Peake dances with a fit alien, then we’ll talk.

This was one of my first green-screen jobs – you can check out some behind the scenes footage below. And after re-editing it earlier this year, I’ve been thinking a lot about green-screen, and how it might help your business.

If you haven’t considered green-screen before, here’s a few ideas to get you started.

• Turn Talking Heads into something special.

So you’ve got something you need to explain. Video’s a fantastic tool to do that. But if you’re just sitting in a chair, in front of a banner stand or a potplant, and talking, then you’re going to look like a million other videos.

And even if you’re telling us about the most amazing news in the history of mankind, it’s going to be hard to keep people’s attention.

Or, you could do this:

For the most part, this is a standard talking heads video. But he use of green-screen makes it look different, memorable and consistent with the subject matter.

2. Take your marketing wherever you want.

Thing about green-screen – you can go anywhere and do anything. That can be amazing, but it can also mean pressure. A blank sheet of paper is sometimes a hard place to start.

So here’s the Creative Genius advice for using greenscreen in marketing.

• Start with the key difference: If I gave you 10 seconds to say how you’re different from everyone else, what would you say? Answering this question will give you a starting point for subject, tone and audience.
• Find an object: Think about objects that sum up your business. These could be literal (like things you use for your work) or figurative (a slogan, mascot, or just something that embodies your key benefit).
• Thinking visual: What’s the visual identity of your organization? We’ll want to represent it in the video

3. Make your team stand out

If your business is all about your people, short videos are an amazing way to get across the personality of your team. And greenscreen lets you do that in unusual and interesting ways.

It means you can have a visual representation of what they do, you can get an individual’s personality across, and make your staff feel incredibly valued.

Here’s an example from some loveable Canadian do-gooders:

One of my favourite ever jobs was at the Developer Conference SQL Bits. They had a Superhero themed after party. Holy Cosplay Batman, these guys made an effort.

The organisers hired us to film the impeccable costumes in front of a greenscreen.

We then superimposed a variety of backgrounds. Here’s catwoman prowling the streets of Gotham:

Here’s Batman and Batgirl throwing down in a back alley:

This was an incredible idea by the organisers. You hold events to give people amazing memories, and make sure they remember your organization. Can you think of a better way to do that, than have a video they can keep forever, of them leaping off a freaking building?

But it’s so expensive… right?

A lot of companies don’t consider green-screen. Which is good: it mean’s that if you do it, you’ll stand out.

But some people think that it’s a strictly Hollywood technology, and if you do have the budget of a Pirates of the Caribbean movie, then you can forget about it.

But these days, it might be a lot more cost-effective than you think. Depending on how intricate the animation needs to be, the technology is accessible to pretty small budgets. And boy, do we love a challenge.

Our next job is for a one-man-band marketing agency who wants to stand out. I’m off to figure how to chop off the top of his head and have things fly out of his brain.